James Mirtle and I had a good Twitter discussion about the defenseman post, and I think his criticisms raised some really good issues and points that I probably need to clarify. I'll go a couple of them in depth because they're questions I can see being raised by others too.

1) "What about player X? He doesn't fit this pattern."

This is true that Chara wasn't a big junior scorer, but then again, how many 6'9'' players have ever played in the NHL? Bruce Arthur also makes the point that even among big men, Chara is somewhat of an anomaly with his immense on-ice ability. But even the data presented in my last post shows that guys who aren't big scorers in junior can go on to NHL success. To this point, I'd simply say that there are exceptions to every rule, and broad-brush analysis isn't going to be applicable to every individual case.

With this being said, there are still far too many examples of guys who were drafted for size or defensive ability that never turned into NHL regulars because they couldn't score. Branislav Mezei, Boris Valabik, Matthew Spiller, Ryan Parent, Matt Pelech, Libor Usturnl, Andy Rogers and Logan Stephenson are all players that were taken early in the draft because of their size or defensive ability, only to find themselves unable to make it as an NHL regular. The list goes on and on and on, too.

The point that I think should have been made more clearly in the last post is similar to the one Tyler Dellow made here: defensive defensemen at the NHL level far more often than not exhibit puck skill at the CHL level. Guys who are known as prototypical shutdown NHL D-men, including Barrett Jackman, Rostislav Klesla, Nick Schultz, Brent Seabrook, Dan Hamhuis, Tim Gleason and Karl Alzner, all were significant offensive contributors to their CHL teams in their draft years.

Of course, this begs the obvious question:

Based on the window of drafts I studied (1999 to 2008), and my cutoff point for an NHL regular (played in 40% or more of available NHL games), these are the guys who scored less than 0.5 Pts/GP in their draft year and have still become NHLers:

At first glance, that's an impressive list of names. However, you'll have to remember that this list is only 12 guys out of a sample of 105 that put up similar offensive numbers in their draft season, so these guys are anomalies. The other important fact to consider is that, with the exception of Fistric (probably the least talented player of this sample) and Schenn (who was in the NHL), every single player on this list became a significant offensive contributor their very next CHL season, as they all eclipsed 0.5 Pts/GP. Once again, guys who turn into NHL players, even guys we regard as pylons like Jeff Schultz, tend to be scorers in junior hockey.

2) "Offensive numbers don't do a good job of quantifying defense."

I agree with James' point here. At the same time, I'm not evaluating defense on the basis of offense. As I touched on in the section above, defensive value of CHL defensemen doesn't seem to translate to the NHL if the player in question isn't a two-way force in his junior career. Almost all of the players that became good NHL defensive defensemen drafted in the first three rounds of the draft between 1999 and 2008 had a high scoring rate in junior, and the vast majority of early round busts in that same time frame were guys who simply didn't put up points in the CHL, as was shown by the data presented in the previous post.

This means that of the draft-eligible defensemen from the CHL, some are riskier picks than others. Here's the table of the CHL guys ranked in the consensus top-90 again: 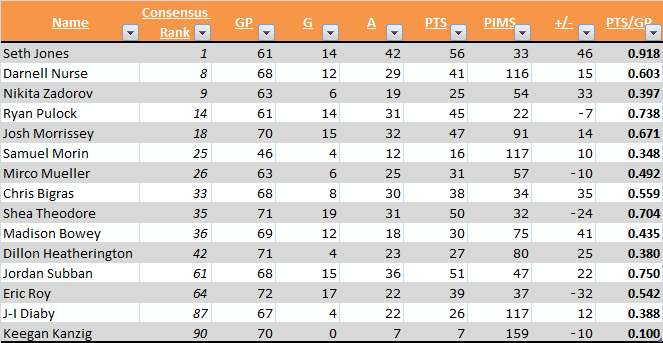 History has shown us that guys like Zadorov and Morin are risky picks. If I were an NHL GM, I wouldn't draft either of these players unless I was convinced that they did possess enough offensive talent to become a big scorer in the CHL in their draft +1 and +2 seasons. James indicates that some scouts believe this is true of Zadorov, and I hinted in my last post that I think Madison Bowey could be a similar case from my limited viewings of the Kelowna Rockets.

I didn't think that "points are not the be-all-end-all" was something that I needed to explicitly state, and obviously there are a ton of other factors that go in to predicting whether a draft pick will be successful or not. However, as a broad brush analysis, CHL point totals still paint a pretty clear picture that guys with no offensive ability in major junior rarely turn into NHL players.

I hope this clarifies some of the statements I made previously, but I still think the rule of thumb conclusion that I came to in the last post is valid: defense at the junior level - be it size, physical play, shot blocking or something else - is overvalued, resulting in a disproportionate number of early round busts. As this is the case, in my mind at least, Nikita Zadorov probably shouldn't be more highly regarded than Ryan Pulock or Josh Morrissey, or maybe not even more highly than Shea Theodore or Jordan Subban just based on the historical examples of what successful NHL defensemen tend to do when they're in junior.